I lost my mind at the Betsey Johnson party 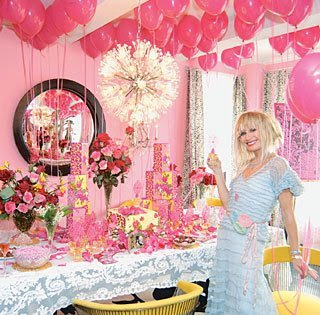 I know three Betsey posts in a row is a bit much but, whatever, it’s her 30th Anniversary and she is my most favorite designer on the planet so blah! I will promise that this will be the final installment of this fun retail mini-series. Part 1 being the announcement, part 2 being the excitement and part 3 will be the big event …

I just got home from the 30th Anniversary party/ shopping excursion and boy did I have a swell time. As soon as I walked in, there was a huge display front and center with all of the anniversary products. I immediately scooped up 2 tees, 2 pairs of socks, and 2 cupcake thongs (hint, hint I will be giving away some of those products in an upcoming contest). There were also cupcakes, candy, and champagne … my three favorite “C”s. BUT they were off limits to me due to the Fashion Week Diet.

My favorite Betsey-girl was there to help me out. She hid my anniversary goodies behind the counter and started pulling pieces that she knew I would love. I tried on 6 dress, 2 tops, and 1 bad ass skirt. I was also sure to come out in everything to give the whole store a fashion show — my idea of a perfect Thursday afternoon.

I fell in love with the Battenberg Party Dress but didn’t buy it. I tried it on in blue /pink but what I really wanted was the black. Shame they didn’t have my size. I also fell in love (again) with this gingham jersey dress and almost got it until … 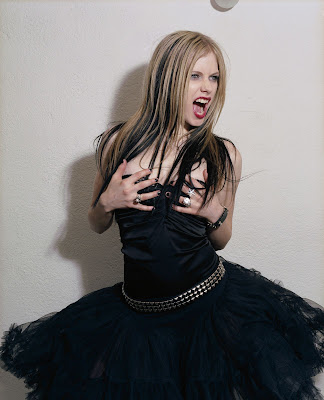 I tried on the crinoline (Avril is wearing it, try to ignore her).

Betsey loves putting crinolines under dresses but hasn’t sold them in her boutiques for some time. I snatched one up immediately and tried it on under the gingham dress, which was adorable. I even had some Fashion Kitty followers who tried on the same combination after they saw me. I also tried on the crinoline with a tank and the pink cropped anniversary skull sweater.

Just like my wink Betsey sweater, which fits like a dream, I know this anniversary sweater will be a perfect addition to my wardrobe.

Both pieces were rock solid so I took them to the check out. What did I end up buying?

And as a bonus (since I spent a small fortune) I got a leopard print make up bag with a full sized Betsey perfume and a body lotion. An even bigger bonus was meeting one of my readers at the check out! It was totally random and awesome and I hope she enjoys her Tattoo Tube dress and bitchin’ pink sweater dress.